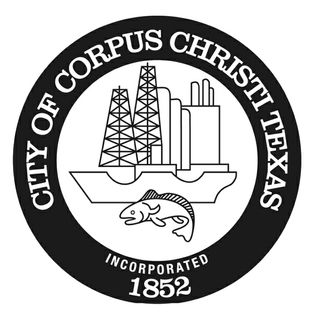 The Seal of the City of Corpus Christi has been an important part of the City Government for about 123 years, in one form or another. The Seal used today was adopted in 1952.

In 1952, Miss Mary Lynn Humble, a student of W. B. Ray High School, was declared the winner in a design contest conducted in all of the Junior and Senior High schools of the City of Corpus Christi. This contest was for the purpose of commemorating the city’s one hundredth anniversary as an incorporated city.

The Seal designed by Miss Humble includes the date 1852, the year the City was incorporated. The Seal includes a fish representing one of  Corpus Christi’s major industries and its tourist trade, and a derrick representing the largest industry of this area—the petroleum industry—and includes factories symbolizing our other industries, such as agriculture, grain, meta, ore refining, and the Port of Corpus Christi.

The Seal accurately depicts the 142 years of progress and achievement of the City of Corpus Christi and foreseeing the greatest destiny for our City. 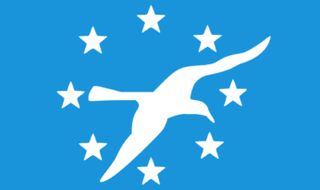 In 1952 Miss Barbara Hesse was the design winner of a contest held in all Junior and Senior High Schools in the City of Corpus Christi for the design of a City Flag. This flag is simple, but symbolic of our city. It is a two-color banner with a white seagull and white stars imposed on a sky blue background.

The background in this flag represents the bay on which the Naval Air Station is located, and the sea gull superimposed thereon represents the people of the City, both those who were born here and those who have come as visitors and residents. The eight stars surrounding the sea gull symbolize the eight major industries of the City. These industries will vary in accordance with the ever growing needs of our community and economy to include: agriculture; commerce; oil, chemical, metal and ore refining; sea foods/fishing industry; tourism; the naval air station; and the Port of Corpus Christi.

In the year 1519, on the Feast Day of Corpus Christi, a lush semi-tropical bay area was discovered by the Spanish explorer, Alvarez Alonzo de Pineda. The bay and the inevitable city that grew there were named in honor of the Feast Day celebrating the “Body of Christ.”

The Trading Post remained an obscure settlement until July 1845, when United States Troops under General Zachery Taylor arrived on the local scene. The Army remained until March 1846, when it left to march southward to the Rio Grande, as the beginning of the Mexican War was near.

A year or so later the city took the name of Corpus Christi as a “more definite postmark for letters was needed.” It was incorporated on September 9, 1852. The first city council was elected; Benjamin F. Neal was the first mayor (1852-1855).

At the first city council meeting, September 9, 1852, it was ruled illegal to hold “fandangos” without a license.

The City Charter was adopted in 1876.

Development of the City Council:

1852-1904—Council members varied from ten to five, including the mayor.

The City Council is the City’ legislative body and is composed of the Mayor, one Member from each of the five Districts, and three At-Large Members.  Each is elected by the citizens to a two-year term.  Five Members constitute a quorum, which is required to conduct City business.  The Council appoints the City Manager, City Secretary and Municipal Court Judges.

Corpus Christi has a Council-Manager form of local government.  Policies are set by the Mayor and Council.  Those policies are carried out by the City Manager.  The Council decides what is to be done and the City Manager implements it with the assistance of the entire City Staff.  The City Manager serves as Chief Executive Officer, and is responsible for the day-to-day operations of the City.  The City Manager exercises control over the City departments and executes authorized deeds and contract agreements.  The manager also advises the Council on the financial condition and needs of the City.  About half of the cities in the United States with populations of more than 2,500 use the Council-Manager form of Government.