CORPUS CHRISTI, TX - The City of Corpus Christi received a commitment from the developer of a proposed wind farm project which will protect the Navy’s flight training mission in the Coastal Bend.

On Tuesday, February 28, 2017, the Corpus Christi City Council will consider on its Future Agenda, a commitment from Chapman Ranch Wind I, LLC, (i.e. Enbridge, Inc.) to prohibit wind farm development in a 16.34 square mile area for a period of at least 25 years conditioned on the City de-annexing the area within six months. The final vote on the proposed agreement is scheduled for March 21, 2017.

The Council is also scheduled to consider on First Reading on February 28 an ordinance de-annexing the Chapman Ranch area from the territorial limits of the City. The ordinance is expected to be approved on Second Reading on March 21.

“I applaud this commitment from the project developer because it achieves the City’s number one goal of protecting the Navy’s flight training mission,” said Mayor Pro Tem Carolyn Vaughn. “It also saves taxpayers money by not having to extend water and wastewater infrastructure in the Chapman Ranch area which may not be developed for many years.”

The City went on record in March 2014 regarding concerns the project might have on the Navy-owned Air Surveillance Radar (ASR-11) located at Corpus Christi International Airport and the ASR-11 at Naval Air Station-Kingsville. The City annexed the mostly agricultural land in 2014, which has approximately 16 dwellings and 44 residents. The City is required by state law to develop a service plan for the annexed area to provide comparable municipal services, including the extension of water and wastewater services. The City estimated the capital costs to extend water and sewer services to the Chapman Ranch residents at approximately $13 million. The project’s original owner moved the proposed location farther outside of the City’s extraterritorial jurisdiction and subsequently sold the project to Chapman Ranch Wind I, LLC/Enbridge. Construction has begun on the project.

“Enbridge, Inc. is pleased to be a part of the Corpus Christi community,” said Terri Larson, Director of Community Engagement for Enbridge. “Through implementation of mitigation strategies in the 2015 Memorandum of Understanding with the U.S. Navy and this agreement with the City of Corpus Christi, our company and employees are showing our commitment to the critical mission at Naval Air Station Corpus Christi and building lasting relationships. We strive to be a good neighbor in all our host communities, and we look forward to working with them.”

Mayor Pro Tem Vaughn said there are no restrictions on future annexation if development occurs in the Chapman Ranch area. She added de-annexed Chapman Ranch land owners will also save money by not having to pay city property taxes. “We know the City’s growth corridor is on the far south side,” Mrs. Vaughn said. “In the future there may be benefits to consider annexation and extension of utilities. Until that time comes the City will focus on delivering cost-effective and efficient services to our existing homeowners, businesses and industries.”

For more information, contact Intergovernmental Relations Director Tom Tagliabue at (361) 400-8807 or via email at tomtag@cctexas.com. 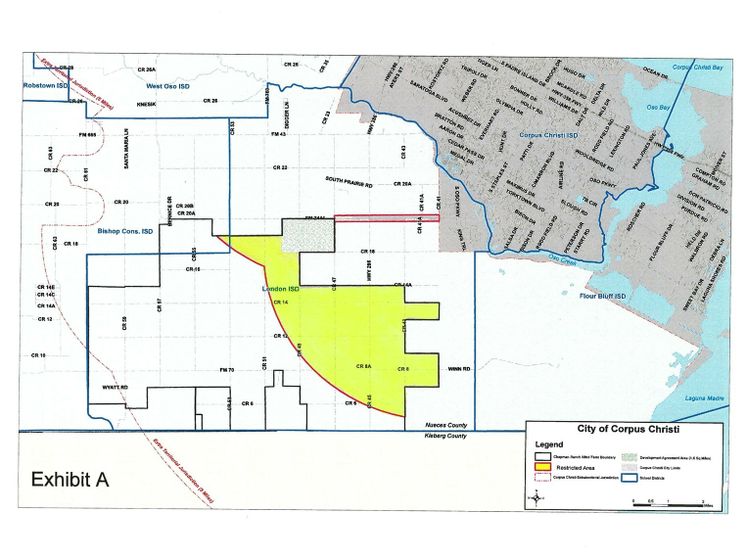