Historic Zoning will Safeguard the Heritage of the City

The property located at 817 South Staples Street was built in 1931 in Art Deco style. It was home to various businesses, including a Piggy Wiggly (1932), Chancellor Food Store (1937), Superior Ice Cream warehouse and store (1940’s), Carnation Company warehouse (1956), Mack Matheny’s Garage (1961), and Sara’s Upholstery. In 2020, the building was purchased and renovated for the Boarri Craft Butchery, contributing to the revitalization of the Staples Street commercial corridor.

The second property at 805 Park Avenue is the Todd-Budd house. Constructed in 1909, this home exhibits the Craftsman Bungalow style of architecture. It was the residence of attorney Jefferson D. Todd Sr. and his wife, Minnie Lucille Renick. Son, Jefferson D. Todd Jr., grew up there and would later become Nueces County attorney, District Attorney, and a District Court judge. The property was purchased in 1971 by Robert Budd, who fled Mexico as a child with his family during the Mexican Revolution. The Budd family still owns the home.

These two properties will be added to the list of 26 properties that are local landmarks and can be viewed at www.cctexas.com/landmark.

The purpose of historic overlay zoning is to safeguard the heritage of the City by preserving sites and structures which reflect elements of the City’s cultural, social, ethnic, political, archeological, and architectural history.

It also fosters civic pride in the beauty and notable accomplishments of the past; and enhances the City's visual and aesthetic character, diversity, and interest. 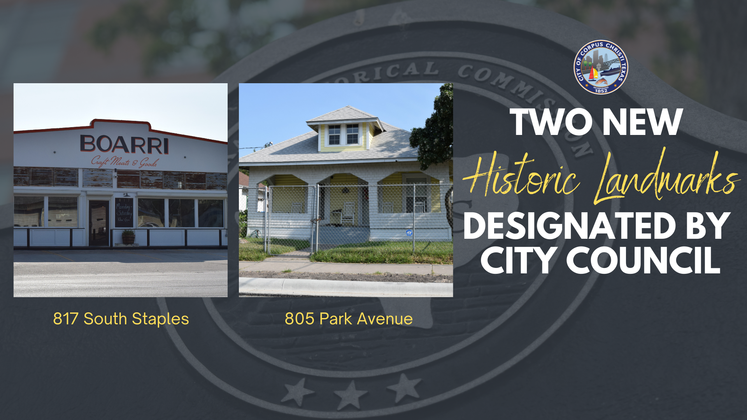