City Advises Residents to Plan Ahead for Buc Days

Traffic Routes Leading to Events May be Limited or Altered

CORPUS CHRISTI, TX – The City of Corpus Christi is preparing for the 84th Buc Days Carnival and Rodeo, held from May 5 through May 15. Buc Days includes a rodeo, carnival, parades, concerts, shopping, and many other attractions. In anticipation of the large crowds, the city will be implementing a traffic plan to ensure the safety of motorists and pedestrians.

Due to expected heavy pedestrian and vehicular activity, the City recommends using the park and ride shuttle services and following posted signs and messages that will help guide them to the area. Residents can expect delays as routes leading to the event areas may be limited or altered.

Residents are encouraged to use the Port Avenue exit to access the Stripes Carnival, the Children’s Parade, and other events held at the American Bank Center.

GETTING TO THE STRIPES CARNIVAL – May 5 thru May 15

Buc Days has made parking available at the Whataburger Field parking lot for $10. They also offer free park and ride services to the American Bank Center and Stripes Carnival.

In conjunction with the Stripes Carnival, the NavyArmy Night Parade, and Buc Children’s Parade, motorists should consider the following parking restrictions and street closures. NO PARKING areas will be enforced on the days and times listed for each event.

The following locations will be designated as NO PARKING ZONES from Saturday, April 30, to May 18:

The following locations will be designated as NO PARKING ZONES and will be closed to vehicular traffic from Saturday, April 30, to May 18:

For the NavyArmy Night Parade, the use of Port Avenue is recommended to access the carnival and parking at Whataburger Field. Access to the parade route and surrounding streets will be limited if arriving after street closures are in place.

Within a block or more on each side of the parade route, all side streets will be designated as NO PARKING ZONES, and enforcement will begin on Saturday, May 7, beginning at noon in conjunction with the NavyArmy Night Parade. Street closures on side streets that intersect with the parade route will be in place by 4:00 p.m. in most locations. The following areas will be closed by 6:00 p.m. unless the Corpus Christi Police Department (CCPD) directs the closure to happen sooner in the interest of public safety for pedestrians:

After all street closures are in place, motorists will be redirected onto either Mesquite Street or Water Street. The parade will begin at 8:00 p.m. along Chaparral Street and will proceed to Staples Street.

The parade will take the following route:

The Corpus Christi Regional Transportation Authority (CCRTA) is offering a complimentary, reserved section for individuals with disabilities during the Buc Days Night Parade. The viewing section will be specially marked on Staples Street, at the corner of Leopard and Staples, near the Staples Street Station.

Individuals with Disabilities Can Secure Up to 4 Wristbands by:

Shoreline Boulevard, between Palo Alto and Coopers Alley, and Mann Street, from Shoreline Boulevard to Water Street, will be designated as NO PARKING ZONE, and enforcement will begin on Saturday, May 14, beginning at 6:00 a.m. in conjunction with the Children’s Parade. The following street closures will be in place by 8:00 a.m.:

The parade will take the following route:

Safety is a top priority, so motorists are reminded to be aware of the work zone, follow the posted detour signs, or seek alternate routes to avoid delays.

For more information on Buc Days and a complete schedule of events, please visit www.bucdays.com. 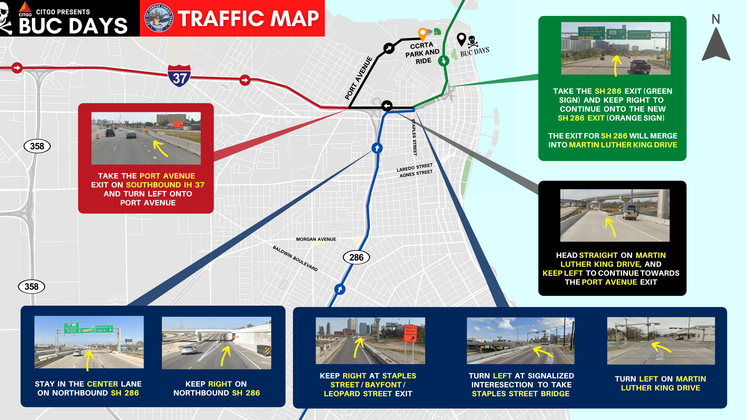 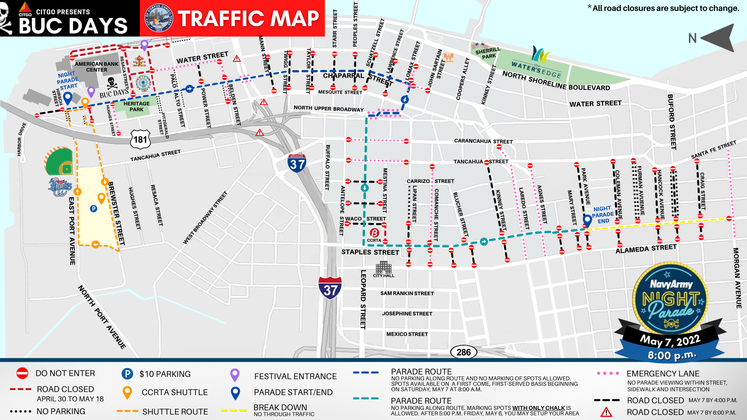 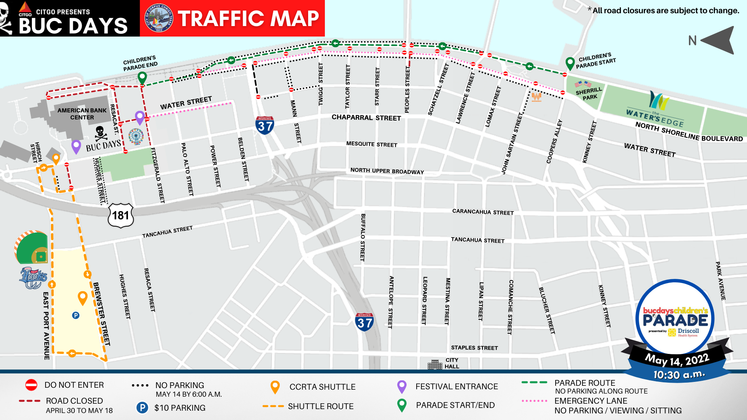