Following the realignment of Shoreline Boulevard and successful conversion of Chaparral Street in 2018, the City and the Downtown Management District agreed that the one block, one-way portions of traffic adjacent to Shoreline Boulevard were the next biggest priority for correcting connectivity issues. The project was identified in the Downtown Reinvestment Zone’s Planning and Traffic Analysis. With new City leadership, this project has expanded to be a beautification project as well as a connectivity project.

“This project is one more step toward connecting our bayfront to our downtown area, and it will also improve the condition of streets that are long overdue for a facelift,” said City Manager Peter Zanoni. “It will enable natural traffic movement and make Shoreline Boulevard more welcoming for tourists and residents alike.”

Improvements for the Two-Way Conversion Project will include a thin asphalt overlay, new signage, and pavement striping. The project is anticipated to begin this month and will take about 60 days. The project completion is based on weather as cold temperatures can affect the overlay process.

“We look forward to finally establishing normal traffic patterns around Shoreline Boulevard. We know from our 2018 conversion of Chaparral Street that a fresh street with two-way traffic is positive for our downtown and makes everyone feel safer,” said Alyssa Barrera Mason, Executive Director of the Downtown Management District.

The improvements will be completed in order from North to South and will begin with Starr Street, followed by Peoples Street, Schatzell Street, Lomax Street and finally John Sartain Street. Streets will be closed one at a time, and as each street is completed it will be opened to the public for use. Safety is a top priority, so motorists are reminded to follow the posted signs both during and after construction.

Residents can learn more about the project by visiting www.cctexas.com/conversion.

For more information media representatives can contact Sr. Public Information Officer Melanie Lowry at 361-826-3837 or by email at melaniel@cctexas.com. 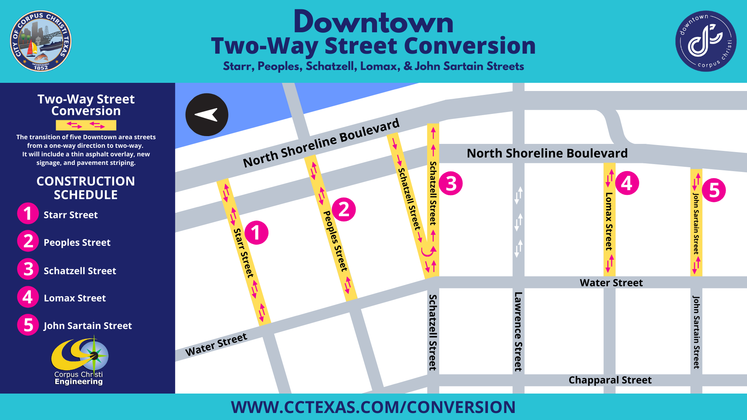