CORPUS CHRISTI, TX - The Charter Review Ad Hoc Committee has released their preliminary report to gather feedback from the public. The City Council appointed ad hoc committee who met over 10 months resulting in recommendations for six proposed charter propositions and four additional items suited for Council policy or budget action. Citizens are encouraged to provide feedback at www.cctexas.com/charter. Once feedback is gathered and evaluated, the committee will present a final report to City Council.

Alternative Option / Recommendation #1 include exploring a State Constitutional Amendment through the City’s future legislative agendas to eliminate the constitution requirements that trigger when any Texas city adopts council terms longer than two years.

Proposition #3: Definition of a Term and Term Limits

No person shall serve more than four terms as a council member, more than four terms as a mayor or more than six terms in a combination of said offices. Term limits are lifetime term limits. If a person serves one or more days of any term, that service shall be considered service for the entirely of the term. Any term served at any time, including a term served prior to the approval of this subsection, shall apply to this subsection. The provision shall not prohibit any council member or mayor from completing any term that begins in 2020 or 2021.

Clarify that signatures are required on statements of intent to commence either initiative or referendum proceedings.

Delete the requirement that zoning ordinances presented to Council for approval require a two-third affirmative vote during the 30 days before the regular election and extending until the newly elected council members take office. These same zoning ordinances require a simple majority vote any other time of the year.

Amend the City Financial Policy to require intradepartmental budget transfers within the same fund to be included in the City’s Quarterly Budget Report which is presented to Council every three months and maintain on the City’s website for public review.

Expand the reporting of contracts under $50,000 for greater scrutiny through a City Financial Policy Amendment. Lower the threshold of $50,000 to include more city contracts reported and maintained in searchable format on the City website.

The provision of dedicated, paid staff resources to support council members is better handled as a policy issue through the annual budget process rather than through a charter requirement.

For interviews or additional information media should contact the Communication Department at (361) 826-3211 and an interview with committee members can be scheduled. 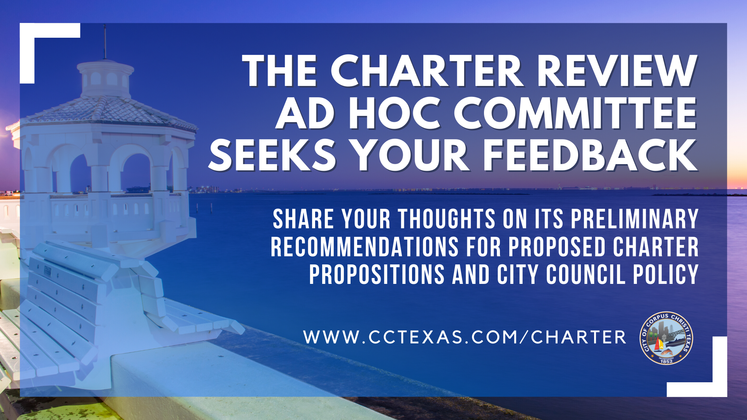